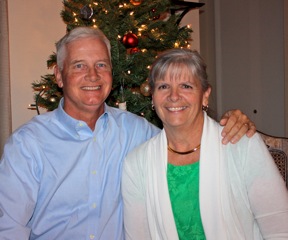 In July of 1992 Frank and Mary Magee formed Moonlight Golf Association, Inc. to make developmental pro golf more available and affordable. Open Golf America at OGATOUR.org was created to serve Moonlight Golf and other independent open pro golf groups and host clubs. Mary, a mother of five has an associate's degree, with coursework in accounting and marketing. She manages all OGATOUR.org business accounts. Mary's parents were avid golfers. As a junior golfer, she learned to play at Old York Road Country Club in Pennsylvania and with her Spalding CASH-IN-PUTTER, is a worthy putting match for anyone.

At Huntingdon Valley Country Club outside Philadelphia, Frank Magee starting caddying at the age of twelve, beginning tournament play at thirteen. Frank won four junior club championships and the men's championship. Frank was runner-up in the Philadelphia amateur championship at age 18, defeating the many-time PA state and twice U.S. Amateur champion Jay Sigel. The same year Frank qualified for his first U.S. Amateur and won his first match. Frank successfully qualified into six USGA events and the Sectional of the US Open.

While serving as a Lieutenant and Platoon Commander in the United States Marine Corps, Frank won successive commands golf championships, then competed in the Inter-service Championship as a member of the All-Marine Golf Team. During his time in the Marines, Frank and Mary had two children, Laura (now Graduate of University of North Florida, married with one child) and Jacquelyn (now Graduate of University of Central Florida, married with four children).

Immediately following Frank's service as a logistics officer with the Marines, having graduated from Temple University with a bachelors degree in mathematics, Frank accepted a position with the General Electric Aerospace Group in Valley Forge PA, as a System Analyst (TS,EBI) during the 1980's Cold War years. During Frank's time with G.E., he received a Masters degree in applied mathematics from Villanova University. While residing just outside Valley Forge PA, Frank and Mary had two more children; Kenneth (now Graduate of the University of North Florida and MS Business from the University of Florida, Major with the USMC on active duty, and married with four children), and Mary Frances (now Graduate of Florida State University, MA in Education from the University of Florida, and married with two children).

After years of Top Secret systems development in secure locations, Frank made a career broadening move with his family to Florida. He became a system Test Manager with E-Systems (now Raytheon), a company which engineers and manufactures defense communications systems. Later as a contract engineer, Frank returned to service with G.E. Aerospace in Valley Forge, and also Cherry Hill, New Jersey. Subsequently, G.E. Aerospace hired Frank a third time bringing him to Daytona Beach Florida as a contract engineer to develop helicopter flight simulations networking. When Martin Marietta consumed G.E. Aerospace and then Lockheed merged with Martin, Frank's service contract was extended. He then worked in east Orlando as a technical proposal manager for new business.

After the Cold War ended with the dismantling of "the wall" separating East and West Germany, Frank decided to leave the defense systems industry. He has since devoted his energies in the development of OPEN GOLF AMERICA at OGATOUR.org, to promote fair market competition, a theme he feels would be well demonstrated in the world of pro golf, and may extend far beyond. In 2003 Frank and Mary Magee had their fifth child, Sean Alexander. Sean currently (YR2020/21) is a senior in high school, with a GPA of 4.7 and SAT 1450, scored 5, the maximum on both Physics and History national Advanced Placement exams. SEAN aspires to become a U.S. Naval aviator, aerospace engineer, and to proudly serve his country.

The No EXemptions Tour, Inc., which owns OGATOUR.org, was incorporated in 1997 in the state of FLorida by Frank and Mary Magee to expand on the mission of Moonlight Golf, creating higher level golf tournament competition for the top performers from Moonlight and other associated independent host club activities. Funds contributed by Moonlight Golf to NEXT! assured that the prize purse levels relative to player fees were consistently the best in developmental pro golf. As other independently owned activities joined the OGATOUR.org program, more players became eligible and played Level2 and Level3 events for greater prize purses.

During one year OGATOUR.org added a little over $50K to its Level2 or Level3 prize purses and awarded two $15K 1st place prizes. Over 20 OGATOUR.org alumni later won events on the PGATOUR. A list of these players and others may be viewed at "Success Stories".

Mobile smart phone activity consumes the younger generations. In the world of golf, the up and coming superstars on the verge of reaching the world stage, seem to live on their phones. Their future audience will view golf action on the phone or not at all. Pursuant to evolving mobile pro golf entertainment, OGATOUR.org now displays unique proprietary features; iLEADERBOARD STEPPPING with iPostTime referred to as the "horses". The stepping function allows the viewer to click a red button and change the full scoreboard display hole-by-hole. This allows the viewer to gain a sense of the tournament drama as it unfolded. The "horses", give the viewer a step by step depiction of that golf drama.

Currently, golf action video is displayed each day of competition and golf action images are changed daily and linked directly form the "RESULTS" page at OGATOUR.org. With the development of proprietary social media capability, and planned real time on-the-course scoring, increased number of regular visitors to the site should elevate. These mobile pro golf entertainment innovations, together with our proven distribution concept, have positioned Open Golf America at OGATOUR.org to provide corporate sponsors the brand association with fair market competition.